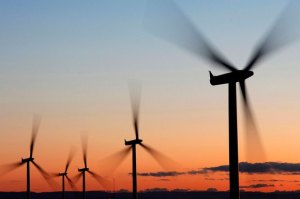 The government’s chief energy scientist has warned that vast areas of countryside will have to be covered in wind turbines, solar farms and biofuel plantations if Britain is to meet its renewable energy targets.

Professor David MacKay, chief science adviser to Decc, the energy and climate change ministry, has calculated that even if 10% of the country was covered with wind turbines, it would generate only a sixth of the nation’s energy needs.

The problem with renewable energy, he said, was that it was “inherently diffuse” meaning huge tracts of land were needed to generate significant amounts of energy.

It was a problem, he said, that applied to all forms of renewables. Powering a single car on biofuels for a year, for example, “would take a strip of land 80 metres wide and 8 kilometres long”.

Similarly, he calculated that if a country opted for solar power to “dominate” its energy supply, it would need to cover a third of the land in solar panels. MacKay, a Cambridge physics professor, revealed his calculations at a meeting held at the Royal Society last week to discuss the future of solar power. His point, he said, was not to undermine the country’s plans to meet 20% of energy demands from renewables by 2020. He simply wanted to make clear the scale of the engineering challenge and the environmental impact of covering so much land with turbines, solar farms or biofuel plantations.

“There’s a general message, you can run through all renewables and you find that all of them are diffuse, so to make a difference they have to be country-sized,” he said.

In his talk MacKay referred to more detailed figures contained in his book, Sustainable Energy — Without the Hot Air.

There, he wrote: “Let’s be realistic. What fraction of the country can we really imagine covering with windmills? Maybe 10%? Then we conclude: if we covered the windiest 10% of the country with windmills we would be able to generate 20 kilowatt hours per day per person.”

This compares with Britain’s energy consumption of about 125kWh per day per person — more than six times higher.

Britain already has 3,400 onshore and offshore turbines which last year supplied about 2.5% of the nation’s power.

MacKay has also calculated the land needed to supply all Britain’s energy with renewables. In his talk he said: “We don’t have to use wind alone but if all renewables are in the same ball park and if we want to have a renewable-dominated future, then the message is the same.

MacKay’s intervention, which echoes similar warnings by the Institute of Mechanical Engineers, comes at a sensitive time for his boss — Chris Huhne, the energy secretary, who is due to publish two of his most cherished policy documents in the next two weeks.

One is the consultation on the “green deal” under which householders will be able to have energy efficiency improvement works on their homes and then pay for them through savings on their energy bills.

The other is the “UK carbon plan” which will set out how the government intends to cut greenhouse gas emissions.

Critics say such targets are unachievable without adding huge costs to businesses and consumers. Huhne rejects this, saying energy efficiency policies will offset these increases. However, the prime minister’s own energy adviser has described Huhne’s assumption as “unconvincing”.

The documents are preludes to the next round of United Nations climate talks starting in Durban, South Africa, next week, where Huhne will push for an extension of the Kyoto treaty on cutting greenhouse gases, which is due to expire next year.

MacKay said solar power was the best of the renewable options. Engineers have produced maps showing that covering a small fraction of the Sahara with solar panels could generate enough power for the whole of Europe.

MacKay pointed out, however, that a fraction of the Sahara was still a huge area. He said: “That little yellow square on the map is not small, it’s the same size as Germany.”

Such a system would also require high-voltage power cables “all the way from the Sahara to Surrey. This might be found quite intrusive”, he said.

This entry was posted in From the Press. Bookmark the permalink.
Loading Comments...